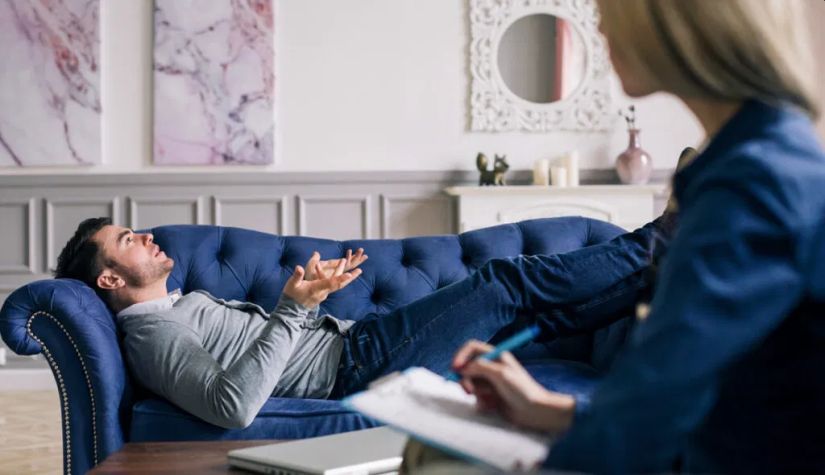 Everyone expects to tell the therapist about his problem and then have him give advice which will solve everything just like that. This isn’t true; it just doesn’t work like that. Advice is cheap; there is no reason for paying for it. Before you came here you got advice from all kinds of people: your wife, your parents, your friends, your family therapist, your pandit, and so on. Many of these people know you quite well; some of them know you very well; and if it were just a question of getting advice there is no reason to think that your therapist would be that much better at it than all of the people who have always told you what to do.

Actually, we find that most people have a pretty good idea of what is wrong and while we can give advice to someone else with a problem similar to our own, it just doesn’t help them. Unfortunately, when people give advice, they usually provide solutions which will work for themselves but not for the person who has the problem. If all of the advice you have received had helped, odds are that you wouldn’t be here.

Your therapist wants to help you to figure out what you really want to do–what the best solution is for you. It’s his job not to give advice but to help you find out for yourself how you are going to solve your problems.

What does this mean? Well, if your therapist sees you getting into some kind of trouble, he may warn you about it, but here again the final decision as to what to do will have to be made by you. The great advantage you will have with your therapist is that he has no axe to grind. He doesn’t think he knows what is best for you, but he is going to help you try to find out. He doesn’t think that he knows the answers. He just wants to understand, with you, why you do things.

Now, what goes on in treatment itself? What is it that you talk about? What is it that you do? How does it work? Well, for one thing, you will talk about your wishes, desires, wants, needs, both now and in the past, fears, fantasies, hopes and dreams. Why should this help? Why is it important? Well, there are many reasons. We don’t talk about lots of things because they are too personal, or because they would hurt other people’s feelings, or for some other similar reasons.

You will find that with your therapist you will be able to talk about anything that comes to your mind. He won’t have any preconceived notions about what is right or what is wrong for you or what the best solution would be. Talking is very important because he wants to help you get at what you really want. The problem most people have in making decisions is not that they don’t know enough, but that they never have had the opportunity of talking things over with someone who doesn’t try to make their decisions for them. The therapist’s job is to help you make the decision.

Another reason is that most of us are not honest with ourselves. We try to kid ourselves, and it’s your therapist’s job to make you aware of when you are kidding yourself. He is not going to try to tell you what he thinks but he will point out to you how two things you are saying just don’t fit together. You know, feelings have to add up, kind of like two and two are four, but we like to kid ourselves sometimes that they are five. It’s your therapist’s job to remind you when you are doing this.

For example, let’s take your ambivalence toward your partner. You have told me a lot of things you dislike about your partner–how annoyed you are with them, how you would sometimes like to throttle them. But there are also reasons for continuing to live with them. There must be, because this is just what you are doing.

The job of your therapist is to help you keep in mind all of the important facts and feelings so that you can come to a solution that takes all of the facts into account. It’s hard because sometimes these feelings conflict; then again, if it were not hard you would not be here, you would not have the problems you do.

You have probably heard that therapists are interested in the subconscious. What is really meant by that? The subconscious isn’t such a mysterious thing when one looks at it. For example, you must have met people who seem to get you agitated and get you really angry with them, but you can’t put your finger on anything they have done to account for your feelings. It may be that this person reminds you of someone but you don’t realize it.

The person whom he reminds you of is someone with whom you are angry, so you find yourself taking it out on the person at hand. Unless you can remember whom you really are angry at, it’s pretty hard to get over the feeling of annoyance. In this case, becoming aware of what is unconscious would be no more than remembering and recognizing the difference between these two people. Sometimes, though, that is an awful lot of work.

When we are not aware of the reason for a strong feeling like this, a therapist would then say this is unconscious. By becoming aware of the reasons for our anger with someone, we can treat him on a more realistic basis. It is easily possible that a very nice individual happens to resemble somebody whom we have good reason to dislike, and so we deprive ourselves of knowing somebody whom we would like because we are not aware of the resemblance. It is the therapist’s job to help you recognize when the feelings you have toward someone seem to be inappropriate and then learn to understand the real causes.

By the way, if you go ahead in treatment, you will find that people around you, who are all for your getting some help now, may come to feel that it isn’t helping you any. This is often an indication that you are changing, and these very changes are puzzling and troublesome to someone close to you. You should know that almost always in treatment some of the people around the patient will be convinced that he/she is getting worse–often just at the time when he/she is really improving.

And the patient himself also sometimes feels worse and discouraged at some stages of treatment. You know, you’ll feel you’re not getting anywhere, your therapist is a fool, and there’s no point in this, and so on. These very feelings are often good indications that you are working and that it’s uncomfortable. It is very important that you don’t give in to these temporary feelings when they come up.

You know, it’s very funny–what will happen, as you talk about more difficult things, is that you’ll find you have trouble keeping your appointments. You won’t be able to get away from work, there will suddenly be necessary overtime just at the time of the appointment, your car will break down or run out of gas, your wife will need your help at home for something, and so on.

All of these things will seem quite unrelated to treatment. The funny part is that they’ll be happening just at the time when things are getting rough for you in therapy. What this means, of course, is that you are getting down to something difficult and important, and that these are the most important times to bring yourself to your therapy meetings. This is what therapists call “resistance.” This is something that always happens sooner or later. The only way to protect yourself is not to allow yourself to judge how important any given meeting will be, but instead to decide beforehand that you are going to be there, come hell or high water.

In other words, if you make an appointment, you will keep the appointment regularly. This doesn’t mean that you can’t postpone a session for good reason, if you discuss it with your therapist beforehand. For example, if you know three or four weeks in advance that you’ve got a business trip, and you know it’s something you have to do, it won’t, as a rule, interfere with treatment if you miss an appointment. It’s the sudden emergencies which are almost always unconsciously planned–things that come up unexpectedly.

Often what you think is trivial and unimportant is really the key to something very important.

Another thing–in treatment you will often find yourself uncomfortable. For one thing, your therapist won’t say a great deal and you will find yourself trying to make decisions about what to say. We do this all the time. If we didn’t, we would get ourselves into a lot of trouble. If you think your boss is an idiot, and you told him this, you might well lose your job. In general, we have to make a distinction between what we think and what we say. In treatment this is not so. You want to say whatever comes to your mind, even if you think it is trivial or unimportant. It doesn’t matter. It is still important to say it.

And if you think it is going to bother your therapist, that doesn’t matter either; you still say it. In contrast to your boss, if you think that your therapist is an idiot, you jolly well tell him about it. You will find this is very hard to do and yet it is one of the most important things to learn in treatment–to talk about whatever comes to your mind. Often what you think is trivial and unimportant is really the key to something very important.

For example, you might suddenly become aware that the room is hot or that the therapist’s shirt is funny or that he needs a haircut, or something like that which seems both trivial and even perhaps a little rude to bring up. Yet, in treatment, if you think of it, you say it. Many times, I have seen things like this turn out to be extremely important.

So, just like the appointments, we make an absolute rule not to think ahead about what you’ll say and therefore protect yourself from facing important things. Say whatever is on the top of your mind, no matter what. If you are really talking about stuff that isn’t important, your therapist will let you know. But remember, that’s his job, not yours, to decide.

2 thoughts on “What is Therapy About?”